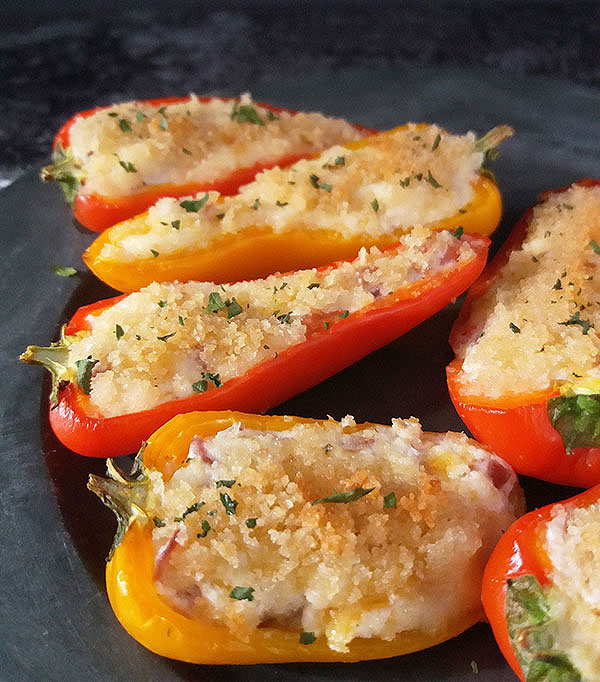 Baby Bell Pepper Poppers are your option to make an appetizer when children are involved; especially if bell peppers are multicoloured and so inviting.
Jalapenos are great, of course, but when the kids are at the table, it makes the situation a bit complicated for everybody. I have always had a problem with saying „no“ to children whenever the food was involved and felt bad because of selecting it due to spicy ingredients.

This one makes it so simple: irresistible sweetness of baby bell peppers, colours and tasty, creamy cheese mixture the halves are filled with makes everybody enjoy the bites. No restrictions for anybody !

Another advantage of these Baby Bell Pepper Poppers is you can serve them with any dip you prefer since the bites are not spicy at all.
What makes it a keeper is the fact that filling could be made with almost everything: finely pulled meat, roasted chopped vegetables, Mozzarella, Scamorza, olives, capers, pecans, small quantities of everything, so it turns to be frugal yet so tasty. And much easier to make then stuffed bell peppers, if you ask me.

When preparing mini bell peppers, it is important to have in mind is that you should avoid cutting the stems away since the whole mini bell pepper halves, deseeded, prevent filling to leak out once you stuff them with Ricotta mixture.

This site uses Akismet to reduce spam. Learn how your comment data is processed.

Hello everybody and welcome to 2pots2cook. Thank you for coming here. My name is Davorka and I am one of the two pots, the other one is my son, a loyal food taster and a patient assistant.
Our food blog ride began in 2015.
Read more

SUBSCRIBE
to 2pots2cook newsletter and get Flower Recipe Cookbook for free!